No recipe, in the hundreds available, is very close to the dish made popular at Empire Szechuan in the late 70's/early 80's. This author attempts to come as close as possible to recreation of the original dish.

Sidebar: in 1995 this author visited NYC on a business trip and took the opportunity to examine the noodles more closely in attempt to see why his efforts of recreation from 1982 until 1995 had failed. The analysis indicated that there are actually two parts to the sauce (see below). This author asked the waiter about the ingredients, suggesting "peanut butter, sesame oil, sesame paste, and ....?" with a frustrating response from the waiter of simply "secret ingredient." The paucity of data given only provided more impetus to solve the riddle of how to make the mysterious sauce.

WHY ARE THE ALL THE RECIPES WRONG?

There are essentially 4 reasons that any recipe can be immediately dismissed as not correct.

The recipe considers the sauce a singular component. Recipes that take all the sauce ingredients and mix them together and then instruct you to cover the noodles in the sauce are not correct. The "real" version actually has two parts to it: a thin, brownish watery liquid at the bottom of the bowl that the noodles sit in when delivered, and the thick oily brown "sesame sauce" that is "on top" of the noodles when presented. Typically (but not always) the server mixes the two together. Either way, a uniform sauce does not result while eating. Instead, the thick sesame sauce begins to integrate with the "bottom" sauce, but in no way were they ever combined to begin with. A recipe that does not understand this distinction will never replicate the original restaurant experience because both the consistency and taste experiences are completely different. No recipe on the web has been found that identifies this key distinction. A photo that captures this element is here: 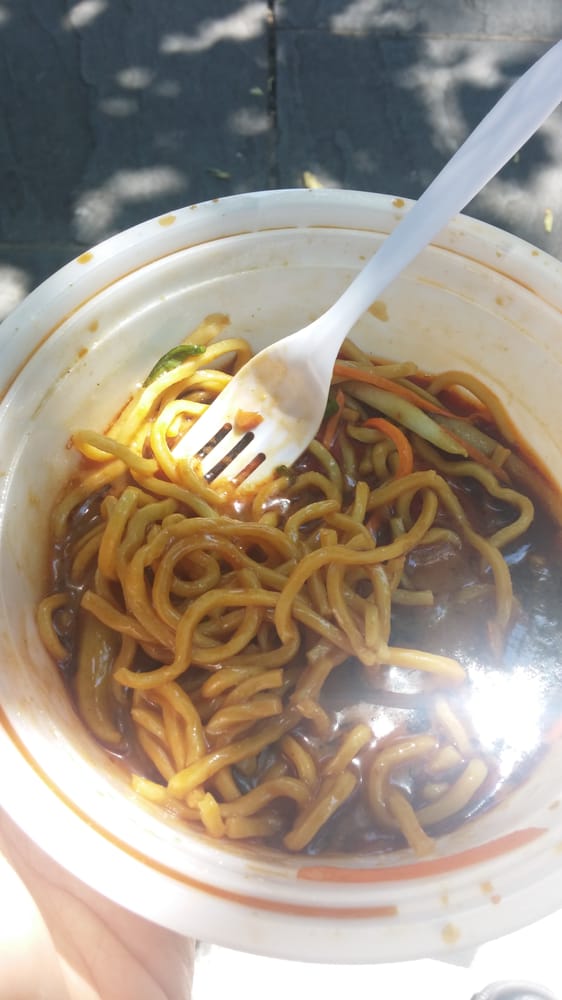 Too much vinegar. Essentially every recipe available on the Internet has been tried by this author in the past 25 years. The major failing is typically too much vinegar. The actual "top" sauce is not very vinegary. The best description might be "hot, peanutty, with some sesame and a mysterious umami sensation that leaves you wanting more." Vinegar is a very strong component which, even with a hint, overpowers most subtle flavors such as a combination of peanut and sesame. Another typical failing is too much sugar. The original dish is not particularly sweet and any attempt to make it so converts it to more of a Thai noodle dish (where sweetness is used to offset the saltiness of the typically-used fish sauce).

Ignorance of noodle consistency and preparation. 99% of all recipes (only 1 has been found that does not have this mistake) instruct you to boil the noodles, run cold water on them, optionally pat them dry and then continue on making the dish. This will not remotely yield the proper consistency noodle. The original dish has a special noodle density that occurs only once the noodles have "congealed" after a period of time in the refrigerator. The consistency completely changes after 6-8 hours of refrigeration and dramatically alters the sensory experience of the completed product. Note that most noodles will tend to stick together after cooking (during the refrigeration period) and thus two steps are required to avoid this: 1) drizzle some sesame (toasted) oil over the noodles to prevent sticking; and, 2) rotate the noodles every 30 minutes (or so) to prevent sticking. The rotation need only be done for the first 2 hours and after that they should not be sticking together. More on noodles below.

Wrong added ingredients. The original version only had cucumber and scallions. Most versions throw in plenty of other ingredients which would indicate the creator has not experienced the original dish. Any addition of such vegetables totally changes the consistency and masks the unique flavor the sauce and is essentially "just another Asian noodle recipe with plenty of vegetables thrown in."

These reasons being stated upfront, the recipe and instructions below: 1) describe the two components of the sauce; 2) avoid excessive vinegar and sugar; and, 3) describe the details of noodle selection and preparation. Of course, the details of the "top" sauce is also provided.

The potential set of noodles consists of 4 options:

Both dried and fresh noodles work equally well. Note that rice noodles are not used, wheat noodles must be used. Egg or non-egg noodles seem to be mostly similar, but egg noodles are a bit more dense and flavorful (but not vegan).

Do not use a noodle that is too thick (e.g. linguine thickness) as it the ratio of sauce-to-noodle will be in favor of the noodle and have insufficient flavor. Use a noodle that when cooked appears to be the diameter of a typical chow mein noodle. "Top Ramen" size noodles are too small but work better than noodles that are too thick. Noodles that are too small don't provide enough density and yield a mouthful of mush vs. something lightly chewy.

Ultimately the choice is yours. For health reasons, this author recommends the low sodium low fat versions of noodles even if they are not not a perfect replication of the original recipe. Some noodles are alarmingly high in sodium and fat - beware! This author has witnessed a dry noodle that had 14 fat grams and 1200 sodium milligrams per serving.

Note that the fresh noodles are often high in sodium, so don't be fooled. Fresh tend to create a better noodles after refrigeration, but you'll have to weigh the health issues yourself if you can't find a low fat/low sodium fresh noodle in your area.

The pre-cooked noodles work out terribly and not recommended.

This author could not find any dry noodles that are the thickness of the original version (all are too thin once boiled). The raw noodles come out thicker, but still not as thick and not as non-uniform as the original, but that is likely because the original noodles were made from scratch.

Ultimately it is a personal preference how you want to cook the noodles. If you cook for less time, they will be a smaller diameter and al dente yields a denser more chewy noodle. If you prefer a larger, less dense noodle, then cook longer. Do not overcook. Ensure you have vastly enough water in the pot when boiling to avoid a gummy residue on the noodles.

The noodle sizes varied in the original version based on the restaurant. Empire Szechuan's tended to be a bit smaller in diameter compared to others on the Upper West Side, but still thicker than commercially available noodles (dry or raw).

Typically, fresh noodles are cooked for about 4 minutes and dried noodles a bit longer. Check the package but test before removing from the water to ensure they are al dente if desired or if sufficiently done otherwise. If overdone they will be less dense and also require more rotating and oil (see below).

Once completed, drain/strain the noodles and rinse in cold water for at least 2 minutes to stop the cooking process. Let the water drain out in a strainer for 10 minutes.

There are many references on the web about making noodles alkaline, which improves their texture (chewiness) and color (more yellow). The primary way to accomplish is to use lye water in the water when making the dough. The alternative way is to add 1 TBSP of baking soda to the water when cooking the dried noodles. You can also add 1 TBSP of lye water which produces a more rich yellow and more chewy texture than the baking soda. Do not ever drink even the smallest amount of lye water by itself, it is very caustic. Lye water is available on Amazon and other online sources. This author could not find it in local Asian markets.

Virtually all recipes available indicate the noodles are consumable at this time, but the noodles are not the correct consistency. They must sit and be refrigerated for at least 6-8 hours (normally overnight, or prepare in the morning and serve in the evening). During this time they will become more dense and the surface will contract to create a more uniform texture.

However, for the first 2 hours you should (ideally) rotate/mix the noodles every 30 minutes to avoid them sticking together and to distribute the minimal sesame oil evenly. Shaking the container is often sufficient (vs. actually mixing). After 2 hours no further agitation should be required.

The "bottom" sauce is a thin watery liquid poured over the noodles after they are placed into the bowl. This liquid appears to be, essentially, diluted soy sauce. Initially it was deemed diluted with water. However, upon additional analysis it appears diluted with Chinese green tea, specifically the "gunpowder" variety.

Combine the soy sauce with 3/4 cup of the tea. This combination will be enough of the bottom sauce for approximately 4 servings. Make sure it is at room temperature before pouring over the noodles. This liquid should be poured over the noodles once the noodles are placed in the bowl.

There are 3 potential options for the peanut butter: 1) "natural" with just peanuts and salt; 2) "modified" such as Skippy or JIF; 3) fresh ground.

The natural tends to be "too peanutty" and overpowers any added sesame flavor. Also, the sweetness (JIF and Skippy have added sugar) when combined with salt (from added salt and soy sauce) gives the eternally delectable sweet/salty combo.

There is some debate about "crunchy" vs. "smooth" peanut butter. This author recommends smooth, otherwise the nuts compete with the noodle texture.

Between JIF and Skippy, it appears that Skippy (smooth) yields vastly superior results compared to the original. JIF is oddly bland in comparison and is not recommend.

Cayenne or Chili Paste with Garlic

Make sure to use toasted sesame seed oil (sometimes refered to as "roasted"). If you want the dish particularly spicy, then you can use spicy sesame oil or control the level of heat/spice with cayenne. This author believes that cayenne offers flavor in its heat and is more authentic. Beware: do not use chili garlic paste as it is likely too hot and imparts too much salt and overpowering flavor.

There is some belief that MSG is used vs. salt. Some people have concerns about MSG. The dish is NOT listed in the Empire Szechuan "MSG-Free" section of the menu, hence it probably does have MSG. Add if desired.

The current version (depending on restaurant) doesn't appear to have garlic but a small amount of finely chopped garlic does impart a terrific flavor to the dish (for those who enjoy raw garlic).

Sauce for 2 servings of Noodles:

It is important to not overpower (both in flavor and texture) with a myriad of vegetables. That is why the original dish contained, at most, scallions and cucumber. Often Internet-based recipes add many vegetables, most likely to increase the interest of the dish given the likely bland (or vinegar-overpowered) version.

Pour bottom liquid over noodles, just enough that the liquid pools at the bottom, approximately 1/3rd cup per serving (more is OK but dilutes the top sauce).

Pour "top sauce" over noodles, as much as is desired (e.g. 4 TBSP per serving).

Mix with chop sticks or fork.